By now I should be used to my neighbor and good friend stopping by with a little gift or surprise every now and again. What initially started as an invite to lunch for a few freelancers in the building a little over a year ago, quickly burgeoned into a friendship that has continued to flourish as my first year here has come and gone. So when he knocked on my door moments after we returned from a weekend trip. I can’t say I was a bit surprised. When he brought his hand out of his back pocket to reveal a Crippled Youth sticker. 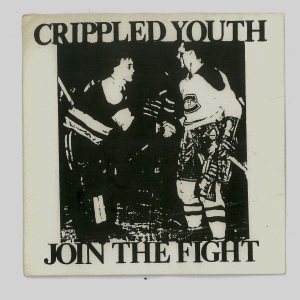 It’s easy to say, I was grasping for the words to express why I was taken back almost thirty years ago when I first purchased my Crippled Youth “Join the Fight” 7′ inch and accompanying sticker at the legendary Some Records. While by no means were Crippled Youth one of my favorite HXC bands. They played one of the first Hardcore matinees I ever attended. Soon after, perhaps due to the urging of friend and Youth of Today frontman Ray Cappo. They would change their name to BOLD and go on to release one full length “Speak Out” and a self titled 7″ on Revelation Records. As I mentioned before Crippled Youth / BOLD were never personal favorites. However, being that “Join the Fight” was one of my earlier Hardcore records and more important, how I lost it when a close friend who had borrowed my copy just weeks before when he unexpectedly went to prison for a vicious murder. It remains ever-present in my mind as part of my history. Seeing that sticker for the first time in more than twenty-five years jogged a lot of memories both good and bad. Being that it came from someone who has become such a good friend brought a sense of closure. Amazing how often people with shared common interests and histories can be found just down the hall . Thanks Kevin. J.D.