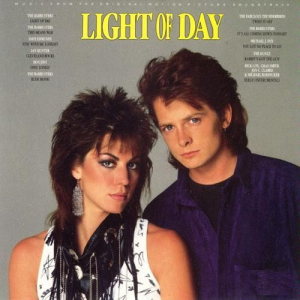 Light of Day Soundtrack – V/A                   Strangely enough I recall the excitement of Joan Jett not only appearing in, but co-starring in a movie about Rock & Roll. Talk about art imitating life. While, at the time, I had little to no knowledge of her history with the Runaways, I was a hardcore, dye in the wool fan of her solo work. I had each of her prior releases, as well as a wall of posters and magazine clips. Thanks to my mom’s connections at work. I had the chance to see her perform at a Hell’s Angels benefit when I was thirteen, maybe fourteen. Needless to say, my fandom was legit, Then came the movie “Light of Day”and let me tell you. the Fit hit the Shan, thus forever staining any Hollywood version of Rock & Roll.

Aside from some of the Rock & Roll stinkers often featured on modern day Viagra and Dong Control medication commercials. The album features a couple of Joan Jett classics, including the Bruce Springsteen written “Light of Day” and the Halligan, Jr./Jett/Laguna/ penned “This Means War”. However, it’s the insufferable and contrived contribution by the fictional Barbusters (a.k.a. The Meanest Mullets) and The Hunzz. As well as the most fictional rocker of all Michael J. Foxx that make this record almost as bad as the movie itself. Till’ this day, I still recall shrinking in the seat of a West Village theatre as my beautiful co-pilot Aliki laughed hysterically through the bad acting and blue collar rock & roll clique’s that were “Light of Day”. And while the record itself is in great condition. A mere glance of the cover serves as an uncomfortable reminder of my questionable past. ** J.D.