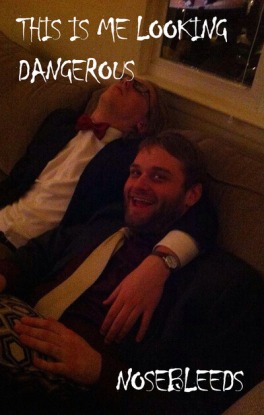 Nosebleeds collects This is Me Looking Dangerous’ last 2 EPs (Because I love Death, and The Winter of my Heart) in their entirety. Ten songs that had such a negative effect on me that I became agitated and outwardly angry only a few seconds in to the first song. Abominable, annoying, grating and unlistenable. Ten songs that felt like twenty-four too many. Musically, this is somewhat diverse with its varied instrumentals, style and approach. Featuring attempts at campy jangle pop noted.Yet somehow, it all  comes off sounding amateurish and infantile. This cassette only release comes via Rat Brain Records on slime green cassettes and is limited (thankfully) to twenty five copies. Unfortunately, I am amongst the twenty five that might be subjected to it.Honestly, I get the feeling this was created with the sole purpose of initiating enough ire to inspire the listener to fire the first shot in what will turn out to be an apocalypse yet to be seen by human eyes. J.D.