Earlier this week  I stopped over at my friend Dave G. place to check out some of the records he’s selling. A good friend and co creator of my other blog United By Rocket Science. Dave has the most impressive and obsessive record collection I’ve ever seen. In recent months I’ve missed out on a number or record shows he’s sold at and wanted to catch up with him before what he was selling got into the wrong hands. As I find myself greying out of my crate digging and my gas eating record store runs. I am reminded that the best source for records is just up the road at Dave’s. Here’s a brief rundown of what I acquired. J.D. 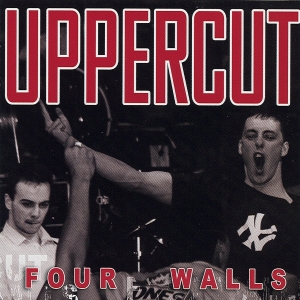 While I often find myself thinking my love for Hardcore music has gone the way of the three finned shark… Uppercut, as well as Alone in a Crowd were two bands I missed the chance to score on vinyl when they were originally released. Not for any lack of interest or appreciation. Let’s just say, shit got busy that year. When it comes down to Uppercut. After acquiring Blackout Records “Where the Wild Things Are”. I found myself stretched for an answer to worst New York Hardcore ode to Straight Edge (pro, con, undecided) While BOLD’s “Nailed to the X” and the Project X laugh track “SXE Revenge” shared the crown. Uppercut’s “Am I Clear” garnered  points with it’s non committal, non relevant and strangely Unclear lyrics.

No For An Answer – A Thought Crusade

California’s No For An Answer were one of the major powerhouses of the late 80’s Straight Edge movement. Often grouped with West Coast contemporaries Insted, Chain of Strength and others, 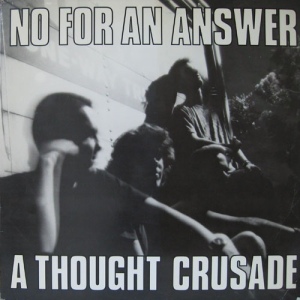 They’re sound, to me at least to me, was like Uniform Choice on steroids. While NFAA’s music was driven by testosterone driven guitar leads and aboriginal rhythms. Dan O’Mahoney’s lyrics were always smart in introspective. Along with Insted and Chain of Strength. No For An Answer were guests during my short lived residence at “The Straight Edge House.” They were one of the five bands I interviewed for the second issue of Unite Fanzine and I had the displeasure of driving them to LaGuardia Airport for their departure shortly after their set at CBGB’s “Free For All” with Token Entry, Rest in Pieces and Boston’s Wrecking Crew. I say “Displeasure” considering the experience led me to pen the song “Dan O’Mahoney don’t tip.” Still, this is a great record that I feel eclipsed the Revelation Records 7′ “You Laugh”. Selling this back in 2,000 along with all of my other HXC and Punk records still remains as one of my only regrets. Retrieving it for less than I sold it for is a nice reward.

Total eye candy and one of the first records I put aside to purchase. Mission of Burma were an essential part of my indoctrination to melodic punk and hardcore. For reasons that can only be described as “Just listen to any and all Revolution Summer releases on Dischord Records.” I always pegged Mission as a DC band. And why not. The bands melodic, smart post punk sound fit the bill of bands like Embrace, Rites of Spring and 3. Yet came about almost ten years prior. Needles to say, this was a nice pick up. One that will get some serious playing time.

The Clash – This is Radio Clash 12′ Promo

It’s been some time since I’ve thought of the Clash as anything more than a vehicle for consumerism and cash. Funny since they were my first love and most important band of Punks I’d ever lent my ears to. Regardless of my disgust in hearing songs that changed my life being used to sell anything and everything. Seeing an old Clash record in a bin still gives me a sweet chubby. As I fondly recall “London Calling” being the first record I ever bought with my own money and the first concert I convinced my mom to take me to. “This is Radio Clash” as one of the first 12′ inch singles to find a home within my cassettes, 45’s and albums. Still a personal favorite. “This is Radio Clash” comfortable sits somewhere in the midst of my top ten songs the Clash released in their time. That apocalyptic theme and those cattle prod beats. I always felt it had a “Planet Rock” funky appeal to it. Safe to say, I am hyped to have this one back amongst the classics I still hold dear.

One can never have enough Superchunk in their life. And while I often catch myself musing over how “On the Mouth: and “No Pocky for Kitty” changed the way I viewed life and listened to music. It was the early singles that first made me fall head over hind for Superchunk. Back then or at any time for that matter. Throwing down a few bucks for a Superchunk EP, LP or show was like getting a money back guarantee that would always be too good to ever want your money back. And while both “Fishing” and “Cool” are by no means new to me. Hearing them both on 7 inch format made them even more endearing to me.

OOH, looky here! The one and only John Brannon at what could very possibly be his very best. While John and his former band Negative Approach were key influences in my early days of Hardcore and a much cherished indoctrination to the dark side. Laughing Hyenas, his post NA band somehow managed to elude my ears. Having heard so much about this band in recent years. I’ve felt somewhat of a loss to what I might have missed out of. So when I saw this record amongst the piles of goodies being offered to me at a reasonable price. This beauty made it to the top of the pile. Just seconds in I’m being reminded of how much I, indeed missed out on. “Here We Go Again” is a rip your throat out to spare your heart goliath. I’m already on my forth listen in one sitting and I’m already geared up for the fifth. Side B’s “Candy” stops just a few steps away from “just as good” while just as savage. Blast this over the speakers on Halloween and you’ll be able to eat all of that candy by yourself. I feel as if this will inspire me to pick up everything I can and more from this band. Someone please point me in the right direction, 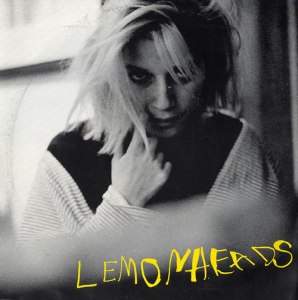 Fuck, it’s hard to believe or remember The Lemonheads were once Punk, let alone on TAANG records. Lucky considering how great they were as both Punks and Indie Pop darlings. Listening to this reminds me of all the awesome singles we used to pick up at places such as Pier Platters (R.I.P.) and …. Side A features a cover of Suzzane Vega’s “Luka”. This is so damn good. Lots of sneered distortion meets garage rock grime. I would put this up against any Nirvana track, sit back and watch and watch as Evan put Kurt to shame. Side B keeps the garage party rocking with “Strange” and “Mad”. This is a single to get dirty with. No doubt about it. This is the Lemonheads I was introduced to via cassette by high school friend Gilbert Hoffman while tearing around the streets of Wayne, NJ.

A recent shipment from RevHQ included the all encompassing “Spotlight” featuring the band Outspoken’s entire recorded output. At the time of the order I had no recollection of what the band sounded like. While I remembered having a copy of “Survive”. It was one of the records whose image stuck with me more than the music ever did. Par for the course when you start buying too many records. Fortunately for me, “Spotlight” turn out to be one of my favorites from that particular bulk order. Even reconnecting me to a long time favorite song from the 1996 Anti-Matter compilation. One I had no idea who recorded. Needless to say, 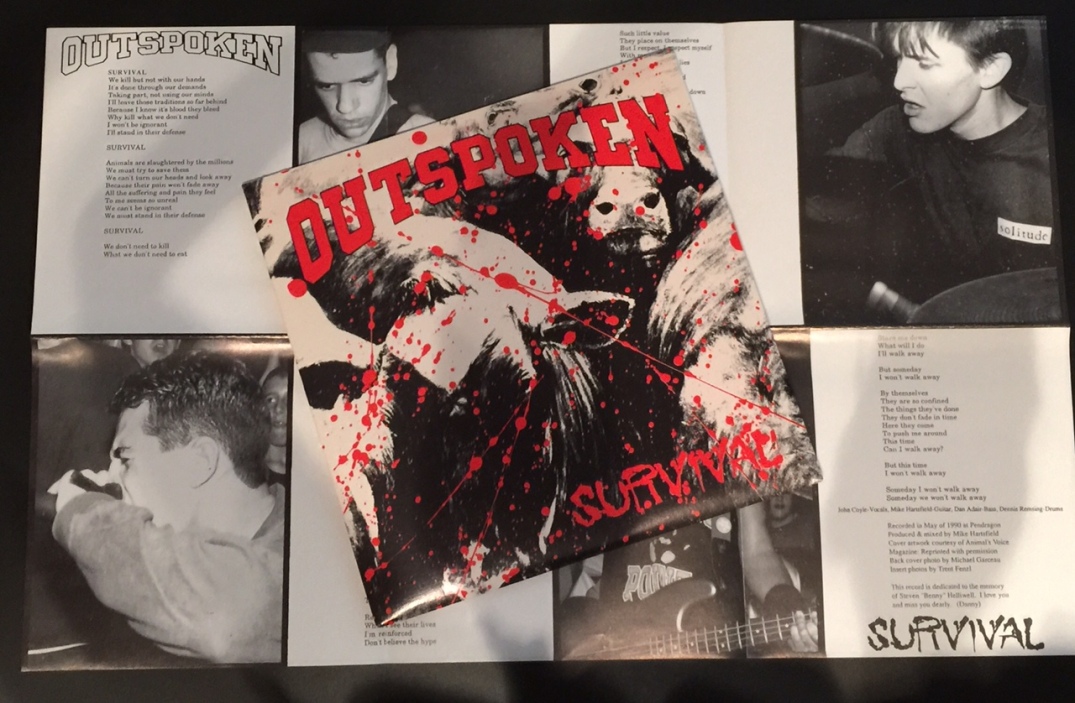 when I scoped it one of the many crates and boxes Dave put on display. I felt the need to reacquire. Visually, it brought me back to the days when every SXE kidded was a vegetarian and every SXE record and fanzine included enough P.E.T.A. propaganda to make even the most dedicated carnivore feel a little bad about themselves. Overall this is pretty good stuff. I record I might have held on to longer if I had listened more than once. A nice reminder of why I love the 7 inch EP format so much.

Here’s another record I owned in the 90’s and sold on Ebay years later. As I recall, I shot down every opportunity to embrace Shelter as a band or Krishna Conscious as a way of life. At the time HXC had already become more about rules and boundaries than music and despite the fact that many of my friends were trading in their combat boots for saffron and krishna beads. 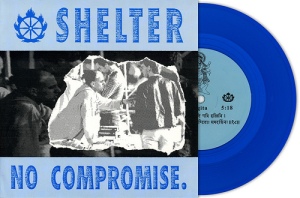 I wasn’t the least bit interested. Eventually though, due to a close friends descent towards becoming a devotee. I gave the band a listen. Looking back while listening years later. “No Compromise” wasn’t that bad a record. “Freewill” still has that fast, tempered energy with lyrics that anyone in the throws of rebellion can identify. And while “Sarangati” is by far, the weaker track. It’s not a bad one at all. Having done my share or reading and researching. LIke most religions, you take the best parts and apply them to your own beliefs. There’s no need to join a commune and spend your life begging for donations while playing shitty Indian music.

Spinanes – A Handful of Singles from the band

The Spinanes are another 90’s Indie act I kind of missed the boat on. (I missed a lot of boats in the 90’s.) Having had a recent interest in tracking down some of the groups records over the past year. I should have known I need to look no further than my friend Dave for these. As I’ve already listened to two of the four singles I picked out of the pile. I realize that I’d best had steered clear of this act. For me personally, this is just flat out boring, After two singles I’m reminded why everyone was on heroin in the 90’s. Not my thing, might be the biggest understatement you’ll ever see on this blog. To quote Leonardo DiCaprio in The Departed “Why don’t you just give me a bottle of scotch and a handgun.”

Great label, people… and oh, the records they’ve released. Happy twenty fifth to one of the best labels on the planet.