It happens more often than not. You head out to see a favorite band and by sheer  coincidence find yourself thoroughly embracing a band you had never heard of. On one particularly freezing night. I risked life and limb to see a touring band by the name of Snowhaus gather at Montclair’s Meatlocker. Less than a year prior. Snowhaus, a Massachusetts act I had never before heard of. Blew the doors of the cavernous collective. Forever sealing my fandom. As this particular show progressed. History repeated itself as I found myself thoroughly enjoying yet another band I had no prior knowledge of. That night and a week or so later at an establishment just blocks away. A band by the name of Basement Beers rewarded me with another great set. With a tour just a day away and lots to talk about. I laid the tracks for the interview I hope you are about to read. Thanks to Teddy, Greg and Shaun. As each of them took the time to chime in and contribute. Here’s to supporting the scene, the bands and the people who make it happen. With no further ado.  I give you the Basement Beers.  (Interview and live images by James Damion.)

James: You just came off a tour with the band Cutters. How did it all come together?

Greg: We’ve been friends with Cutters since our first show on the same bill together at               Stevens Institute which was either November 2014 or February 2015. Since then we have shared the stage together and become friends. In November ’15, Pierce hit us up about this incredible opportunity.

Shaun: We’ve known Cutters for a while now, and at the last show we played together in Brooklyn, Pierce loosely suggested we do a tour together. Fast forward a couple of months, and Cutters is going on tour and they followed through and asked us to join. Pierce drunkenly suggested it to us when we played together in BK. We didn’t hear back so we assumed it was just bar talk, but they hit me up on Facebook shortly after and it all sorta fell into place.

Teddy: Pierce drunkenly suggested it to us when we played together in BK. We didn’t hear back so we assumed it was just bar talk, but they hit me up on Facebook shortly after and it all sorta fell into place.

James: Were you big fans of the band before this all came together? You were out for 17 days. Where did you go? Was this the longest you’ve been away from home?

Shaun: We’re all big fans of Cutters, Greg hums their songs as he falls asleep at night. I was only out for 10 days, but that is the longest I’ve ever been away from home.

Teddy: What they said ^^^ Cutters rules and it was a blessing to be able to explore the country with them.

James: What happened to Shaun during the tour that needed medical attention?       Who filled in while he was unable to perform? 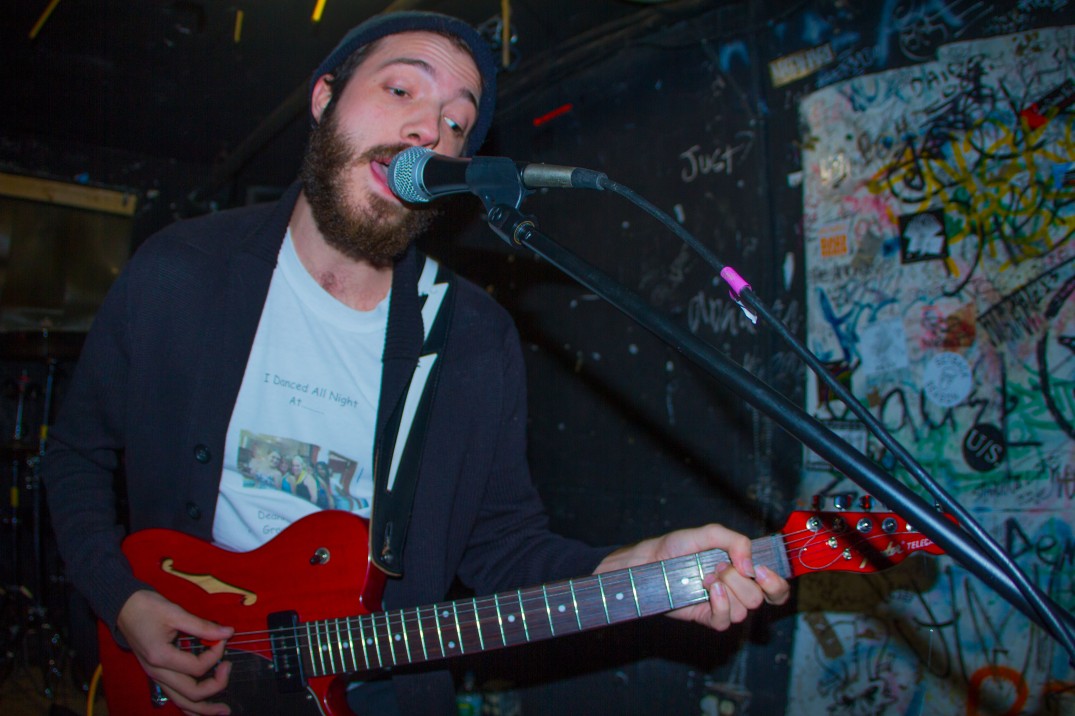 Shaun:I had what’s called Pneumomediastinum, which is a medical way of saying I had pockets of air in my neck and shoulders. I was diagnosed with it the day I was supposed to leave for tour and it kept me bedridden for almost 5 days. Teddy filled in on vocals, as did Pierce and Brian of Cutters. But even when I was on tour, I couldn’t sing because of my condition, so I was strictly guitar.

Teddy: Brian filled in on guitar for the first leg of tour, and I did vocals the whole time which was incredibly nerve-wracking.

James: From your posts on Facebook. It looks as if you made a lot of friends along the way. Were there any particular moments, bands or people who particularly left an effect on you?

Greg: There are so many, but definitely the people who we never met before who cooked for us, and let us crash at their place. Forever grateful. Forever Grohl.

Shaun: I still think Allen from Austin was the gnarliest dude. He fed us breakfast burritos and was the only guy at his house that saw us play. Plus, he traded me a killer vest, which I wore for the remainder of tour. But Andrew, also from Austin, let us stay his place for three days, which is unbelievably kind.

Teddy:We made too many friends to count. As someone with a lot of anxiety, touring is really terrifying because it puts me completely out of my comfort zone for weeks, but the DIY community has proven time and time again to be some of the nicest and most accepting people there are.

James: Alright, let’s get to the heart of the matter. What’s behind the silly name? Are we talking about a great basement show low lighted by a couple of cases of Pabst Blue Ribbon? Or is there a deeper, more sociological meaning behind it?

Shaun: We were honestly drinking beers in Greg’s basement, fleshing out our first songs and that was what Greg half jokingly suggested. I honestly wanted to change it, but it’s to the point and makes sense for our music and the type of shows we play. Also we still practice in Greg’s basement.

Teddy: We drink beer and play in basements, its pretty self-explanatory.

James: How did you first meet and what made you want to make music together? Had you been in other bands before?

Teddy: I’ve played in bands with Greg and Shaun before when I was younger, none of them were very good, so its surprising that Basement Beers has gone anywhere. (lmao)

Shaun: We all went to the same high school, but each in different grades. I had been writing more guitar parts, and I knew Greg was a drummer, so I wanted to jam on some of them. After that first session, I suggested we bring Teddy into our midst. Teddy and I had been in a prog rock band in high school, so I knew they’d be down for whatever.

Greg: I remember I hit up Shaun, who I had been friends with for years from the local scene, concerts, parties etc. about jamming. We had our first jam in January 2014. Then that February Shaun invited Teddy, who we were both friends with and had played in bands with before to come to my basement and drink beers/jam.

James: Did you originally set out to be a trio? Are there any plans to perhaps add a piece or two?

Greg: We are such completely different people from each other which makes this band quite interesting. We’ve never really considered adding a fourth member unless it would be Kevin James or Dave Grohl…maybe Steve Harvey.

Shaun: I’ve always wanted to add a second guitar, mostly because I write so many different parts for every song and I can’t play them all. However, it forces me to be concise in my writing, and I think it makes us stronger as band, because we are restricted with what we can do.

Teddy: We’ve talked about adding another guitarist or possibly a synth player but it’s already hard enough to coordinate shows/practices with 3 people so it probably won’t happen.

James: How would you describe your sound and overall method of destruction to someone who hasn’t heard of Basement Beers? Influences, bands or a genre, sub genre you might find yourselves

Shaun: I just tell people a punk band so I don’t have to get into the details. We have some emo, some twinkly stuff, some mathy stuff, but I just consider us a punk band. I’m influenced by bands like Glocca Morra and Into It. Over It. but also Van Halen, a lot of Van Halen. I want to do blow with David Lee Roth.

Teddy: People keep calling us an emo band or a pop punk band and I don’t really think we fit either of those categories. We’re definitely somewhere in the Punk genre but I think categorizing it more than that would have pigeonholed us,  ya know?

Greg: Personally, New Orleans and Austin for me. Favorite bands… too many! Anytime I get to see Cutters I am grateful. They always put on a stellar show and I learn so much from their performances…all four of them! Best part of tour for me was getting to see them do what they do best every night 🙂

Shaun: Although I’ve only played with them once, Jank was a blast, super nice homies. Cutters without a doubt. Also, Snowhaus, can’t forget Snowhaus. I’m a sucker for New Brunswick basements. My favorite shows have always been down there.

Teddy: We’ve played with so many cool and supportive acts its hard to single any out, but I think PUP was the coolest band we ever played with. As far as venues go, the Meatlocker is like a second home to us, but I love playing any dank basement.

James: Your last EP “Nothing Outstanding” was quite good. Personally, I feel the title itself undercut the fact that it was a stellar release. What led you to choose such a self-deprecating title?

Shaun: Some guy in Russia reviewed our first recording, and one of the comments on it was that it/we is/are nothing outstanding. We thought that was really funny, so had to use it. Personally, when people say shit like that, it’s super motivating, because it makes me want to be better.

Teddy: The only press we got for our first EP was from a Russian “Midwest Emo” music page, who called our EP “Nothing Outstanding” and “Ordinary Twinkle”. They said the same thing about our second EP. It’s truly amazing that nowadays we can be roasted by strangers on the other side of the planet effortlessly.

James: What’s next for the Basement Beers? Are you writing new songs? Can we expect any new music in 2016? Any last words, shout outs, disses or schism?

Greg: Racism is schism. We are recording our upcoming third EP at the end of May! We are also getting close to our 100th show. Besides that we got some new merch goodies coming soon!

Shaun: We have a little weekender in the last week of April with our pals in Mr. Pink. We have shows sporadically throughout, but I think the big focus is recording. We’re recording a new EP at the end of May at Backroom Studios, so that should be cool. Hopefully we’ll have a more fitting title for this record, but knowing us, probably not.

Teddy: Got some more shows coming up, recording a new EP, another little tour, and some sweet, sweet merch, homie.

For  more information on Basement Beers. Click the links below.